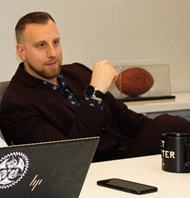 “True growth and change either come from times of great inspiration or terrible discomfort… but never through Apathy. So be sure to have purposeful intent and passion behind everything you do, and you will end up living a truly fulfilled life.”

Few people have walked a more improbable path to becoming a part of a national Digital Marketing Company. Born in Lockport, New York to a mother and father who were both natives to the city, Wallace was raised in a humble home with loving parents whose integrity and selfless generosity of spirit reflected their proud upstate roots. The homespun values they instilled in him, paired with his innate sense of optimism, compelled Wallace to devote his education and life to helping stand up for and giving back to people, regardless of his or her background, the same fair chance and opportunity that America gave him.

After working his way through college with the help of Academic and Division 1 NCAA athletic scholarships as a Multi – Record Holding Swimmer, Wallace moved back to Lockport after living just outside of New York City for the prior 4 years. It was here that he gained valuable life and business experience through a variety of sales, managerial and marketing director positions. He grew through these career experiences over the four years post college, all while going through the hiring process of the local Police Department in the community which he was born and raised. Once sworn in as a police officer in the city that raised him, Wallace devoted his continued training and efforts towards being an honorable public servant that looked out for the people in his community. Despite Wallace’s efforts and desires to inspire and help foster an era of change uniting the police with the people of his home town, his bright future career was cut short after an unfortunate accident left him with a fractured spine, ultimately requiring Spinal Fusion Surgery.

In a time of great adversity and change, Wallace’s born leadership, optimism and unrelenting willpower ushered in a stronger desire to move forward and grow from this experience and find purpose in a new life and career path. It was on this journey, after forming his own successful company as a budding Entrepreneur and business consultant, that Wallace’s paths crossed with the CEO and team at Range Marketing. Over several months, Wallace experienced first-hand the empowering culture of success and integrity that was clearly forged into the pillars of which Range Marketing was built upon. Wallace, being so moved and inspired by the team dynamic and environment at Range, chose to turn away from the entrepreneur life to fulfill his longing internal desire to be a part of this strong team and organization. Over the following months with Range Marketing by becoming enthralled in the culture and team atmosphere, Wallace has grown significantly as a salesman, a team member and as a man. The future for Wallace, the sales team, and Range Marketing as a whole, is truly bright and exciting.

Let's get started.
You'll be glad you did.